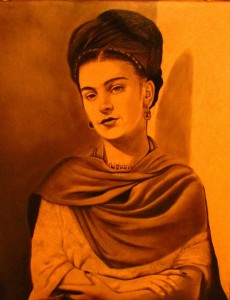 My name is Tato Caraveo. I paint and play music. I work in different mediums, originally starting with spray paint and graffiti murals, then moved on to more fine art like oils and acrylics. And lately, I have been working with a lot of charcoal on wood portrait and collage style pieces.

I’ve been playing the bass in my band, Sunorus, for the past ten years. We have a lot of original songs that I and my band mates write, with the exception of a few jazz standards, as well. Our sound ranges from prohibition era jazz, to 60s & 70s psychedelic rock and funk, to Americana Country, to Spanish Gypsy.

I also work at The Lost Leaf, a local beer and wine bar and art gallery. I curate each monthly art show, as well as book the live music we feature, which includes touring acts, local musicians and bands, some djs, and improvisational jam sessions, 365 days a year. 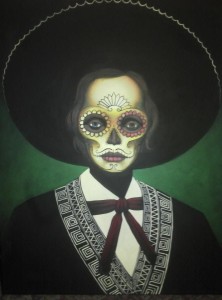 All my brothers and I got a very early start in music by my dad who was a 3rd generation musician. He played over 6 different instruments, and played in some bands who toured the southwest. My uncles and grandfather were all musicians as well so playing music wasn’t really an option in my house, it was mandatory. I started out by playing drums in the school marching band in elementary school, then transitioned to the guitar later in high school, and then eventually to the bass guitar, followed by the bass violin. I went to South Mountain High School in South Phoenix where I grew up, and they have amazing art and music programs which really expanded my knowledge and enabled me to cultivate those skills. The school band was where I really began my lifelong love and fascination with jazz music and the era during which it was created. By my sophomore year in high school, I was playing out live on the weekends at house parties in skate punk bands, in my early twenties I had an experimental psychedelic band, and later in my 20s joined the 60s psych garage rock n roll band, The Hypnotwists, and formed Sunorus in 2003. The rest, they say, is history.

I became interested in graffiti art in the early 80s. I first became exposed to the art form through hip hop B Boy battles my brothers and I would go to and compete in starting when I was about 9 years old. I started in a graffiti crew around 1991 and put up a lot of murals and pieces around town, and some on some moving canvases as well. After years of that, I grew sort of uninterested in all the street politics involved with graffiti and crews, and decided to just paint on my own; I continued to paint murals outside as well as in some local bars and venues such as The Emerald Lounge, The Ruby Room, and The Brickhouse. This all eventually led me to start more fine art pieces such as oil paintings inspired by the masters such as Caravaggio, Rene Guido, Michelangelo, and Da Vinci. I also do some surrealism inspired by Dali, and some skeletons and day of the dead type artwork which is inspired just by living here in the southwest and growing up with Mexican roots.

Art museums, Sunrises, The Universe, Riding my bike… I can pretty much find anything inspiring depending on how I’m feeling and where I’m at physically, spiritually, and emotionally. 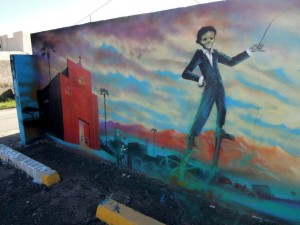 The mountains, the morning and evening skies, all the old ghost/mining towns like Bisbee and Jerome, the cacti, native trees like Palo Verdes and Mesquites, the close proximity to Mexico, monsoons, rain, The Grand Canyon, The Painted Desert, all of my friends here, Arizona’s musical history, just to name a few.

My online portfolio is available for viewing on my Facebook profile by clicking on the “Artwork” Album. I show my work at various galleries around town as well, it’s best to check my Facebook account for updated information about dates and locations.

I would like to travel around the world to see various ancient archaeological and historical sites, especially the art museums in Italy and France, to see the original masterpieces in person.

“Patience will get you there quicker,” in life, art, music, and all matters.

All photos courtesy of Tato Caraveo