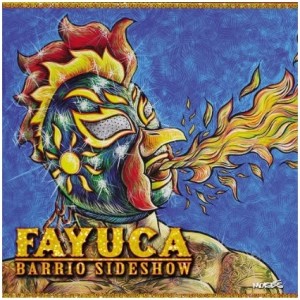 I always liked the idea of Fayuca more than I liked the music: Latin influenced punk-ska-reggae with vocals in both English and Spanish, what’s not to like right? For me, it was their delivery. It just never pulled at me. Thankfully, I can say all that has changed with their newest release Barrio Sideshow. I just can’t stop listening to it. Songs pop up in my head at the most random of times when I’m not listening to it. Released in May on Fervor Records, the sounds explored on Barrio Sideshow extend well beyond their earlier releases. Now I know what that may sound like to long time listeners of Fayuca, that they’ve watered down their sound, but I’ll tell you that is not the case. The beauty of “Sigo Amandote,” the raw power of “The Cycle,” these heights had never been achieved before this album. Their hot song right now is “Shoot It Up,” a tale of friendship and drug use featuring Jason DeVore of Authority Zero. With it’s eerie organ, mariachi horns, and reverb guitar all set atop that infectious reggae beat, you’ll be hard pressed not to nod your head to this track. Check out the video here, and their webpage for more info and show dates. 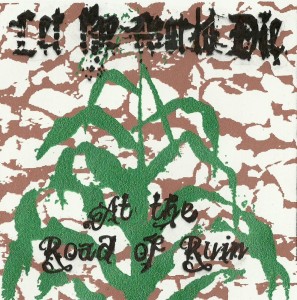 At the Road of Ruin

When I first heard Let the World Die, I messaged a friend immediately. There’s only so many people a person can know that truly groove on ska-punk, let alone ska-metal. Yes, you read that right. In the vein of Choking Victim/Leftover Crack, Against All Authority, and Thumper’s classic track “Backstabber,” Flagstaff’s Let the World Die write and perform “Punk-Ska-Thrash-Grind-Sludge-Blackmetal-DBeat” music. It’s freakin’ awesome too. I suggest you read the lyrics while you listen however. I don’t think many folks realize how poignant and sublime black metal lyrics can be. Ya’ know, once you get past the shrieking. “4th Wave” contains some of my favorte: “A false road, politics of the greedy/A war with our own people/Lying to forget what we already know/Changing to be the worst, Become our own destruction.” I feel that way too. Mark (guitar, vocals), Jaime (bass, vocals) and Pauly (drums) have made a delightful addition to the crust-reggae genre. Also check out their other band ToWarDis, where the members switch instruments, add Nick on guitar, and play ass kicking grindcore! Listen to Let the World Die here. 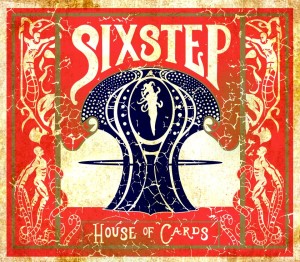 Sixstep reached out to us. You see, they’re from the greater Los Angeles area and knew that we only cover Arizona acts. With some exceptions of course. Al Rahn, lead vocalist of the band, stated to us that “the sense of community and support on a local level we have received from Arizona fans…far surpasses anything that our native California has been able to offer…In fact, it was a recent online fan who recommended reaching out to YabYum!” Now that is just cool on so many levels. It’s no surprise to me either. Maybe it’s because we have so few of them, but we love our rocknroll skapunk band’s here. 2Tone Lizard Kings, Captain Squeegee, and Liam and the Ladies all hold dear places in many hearts. Sixstep fits right in with all of them. They latest album, House of Cards, is like a party that you can just put on whenever you want. I mean Mike Cleveland’s sax man! Whoo! that kid can wail. Describing themselves as “alt rock fusion,” Sixstep play the type of music that Mr. Bungle, Estradasphere, and Frank Zappa played. Un-classifiable, every-genre-thus-no-genre music that is sometimes referred to as “musicians music.” That means it’s awesome. Who knows better about music than musicians right? Seriously catch Sixstep when they roll into town next week. They’re playing a 3-day stretch of Tucson, Gilbert, Tempe next Thursday through Saturday. Check out their Facebook page for more info or stream the album here.