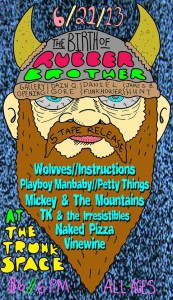 To celebrate the Birth of Rubber Brother, the new label is pulling all the stops with a 5 Tape Release at the Trunk Space in Phoenix. That means five new recordings from five different Rubber Brother bands.

Let’s discuss the recordings set for release this Friday before we get to their mode of delivery. I’m maybe most excited about the first Wolvves EP because it feels like I’ve been waiting forever for a release (this is a lie, it’s only been like three months since the first time I saw them but it does feel that way). Playboy Manbaby and Instructions are the two bands putting out tapes on Friday that already have a release or two under their belt so local music fans should be hyped about these two names already. For newcomers Mickey and the Mountains this Friday marks their first show but they’ve already secured my fandom with their album Creepy Martini (read more here) set for release on tape at the show. Last but not least, we have the brand new band Petty Things releasing their first album following a little SoundCloud sneak peak.

The five bands releasing albums will be joined by label-mates Tk & the Irresistibles, Naked Pizza, and Vinewine for the Birth of Rubber Brother. Also happening at the Trunk Space on this very same night is the opening of the art exhibit “Transmute: The art of Dain Quentin Gore, Daniel Funkhouser, and James B. Hunt” if you even needed more of a reason to be here. Check out more about the event here.

Now, let’s take a moment to talk tapes. Tapes might seem a bit antiquated considering many of us now drive cars without tape decks and our computers house the majority of our music collections. Just take a moment to really think about it though. Tapes are cheap and portable, maybe even a little kitsch which adds to their appeal as a collectible item. CDs are going out of style and vinyl gets costly when you can just get the music digitally but a tape somehow seems different.

Tape trading, historically speaking, has been the vehicle to launch many bands beyond their hometowns. The tape trade of the 80s and 90s was the way to exchange not-yet-known bands. And, tapes carried a mark of coolness. Being in possession of some rare release meant knowing about bands before other people and it meant that you were part of the force that helped launch the music you loved. Fans are part of the creative process. Their support can mean the continuation of artistic endeavors.

The tape trade made every hip listener a cool-hunter, ever eager to discover the best music before anyone else. Punk and hiphop were brought to the forefront of the music industry in part because of the proliferation of tapes. I want to see the same thing happen with the DIY arts movement and its weird folk and anti-corporate tendencies. A new tape trade just might be the thing to make it happen. Harnessing the power of youth culture can steer a generation. Let’s move away from faceless consumerism and take hold of our purchasing power. Invest in artists one tape at a time.

Head out to the Trunk Space for the Birth of Rubber Brother Records and add to (or start) your tape collection. It just might be a moment to mark an era.