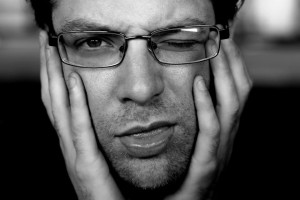 I wasn’t sure what to expect as I waited for Anthony Fama to arrive for our interview over coffee. To begin with, I guess I expected him to be late. Musicians usually are. I often start most interviews accepting excuses and/or apologies while hoping the artist proves charismatic enough to overcome my initial writerly annoyance. My encounters with Fama have been pretty much only been as a witness to his onstage performances with his former band Doctor Bones. In my experience, an outlandish onstage persona often denotes a brooding or self-absorbed offstage reality. And self-absorbed often means late. Then, right on time, Fama arrives proving my theories wrong for the first time that morning.

Anthony Fama originated in New York but moved to the Valley when he was thirteen. It was in Tucson that he really got a taste for performing, working briefly with a punk band and logging eight years with an improv comedy troupe. Heartbreak led him to a new start in California where Fama “tried to be normal” which I took to mean working a normal day job without some artistic vehicle at the center of daily life before deciding that definitely was not his path and returning to Arizona.

Anthony started making the rounds as a musician, playing open mics and performing with his brother Keith. It was at an open mic that Anthony was first approached by Mike Vigil and Jess Pruit who had the concept for a band.

And, that brings us to the Doctor Bones era. Fama worked with the band for a couple of years before an unexpected (for Fama and for fans) breakup on the singer’s birthday. I know I was a little dismayed at the sudden rift in Doctor Bones but since then we’ve seen the remnants of that division move forward musically in new directions. And no one seems to be talking smack. Anthony himself admitted that he can be a little “difficult” in his relationships, musical and otherwise.

I was not alone in my excitement to hear the early recordings of Anthony Fama all by his lonesome.  Fama’s voice has a Robert Smith / Ian Curtis hue that imbues his music with an inviting darkness. Add to that his stripped down, emotive lyrics and you have the making for some memorable songs.

When it comes to character, there’s a grandiosity that allows certain people to believe they have the power to invoke a change in others. These are the people who occasionally enact actual change. Anthony Fama is one such person: willing to make something real or go down trying.

Over the course of our conversation one thing definitely came across. He wants his art to effect people directly, to impact them, and maybe even change them. He wants to remove the division that musicians erect between the self and the performer. According to Fama, the defining quality of our generation is apathy (hey hipsters). Sounds pretty accurate. His goal is directly confrontational with this pervasive tendency toward disaffection. Fama is an artist that values communication and emotional identity, especially in the face of a dramatically changing social and political environment, the age of the internet and separation.

Anthony Fama isn’t afraid to tackle the darker subjects. He knows the many names of depression, poverty, and heartbreak and still believes alienation can be overcome. That alone is admirable in the post-human world.

Onstage, he makes his audience face the things they are taught to look away from. Things like suffering and sexuality. It’s all part and parcel of aggressive art-making. Although his future plans for performing don’t include the clothing removal escapades we saw with Doctor Bones, I’m sure audiences will always find an engaging performance with Anthony Fama whenever he takes the stage.

For now, Fama plans on taking some time to develop his musicianship and work on his already impressive arsenal of songs. He’s also working on being more of a grown-up, something many of us  as “eternal kids” have sought to avoid. Anthony is quick to remind me that the goal is to grow while maintaining our childlike wonder.

Well, this past week I got to spend some time being pleasantly surprised by a morning in the company of a punctual musician waxing philosophical about a generation “collectively self-destroying” and the artist’s power to save it. Or, at least, fill our end days with beauty. I can’t wait to hear what comes out of Anthony Fama – the solo project – in the future.