This two track teaser offers French Girls fans a chance to preview a little something-something from their forthcoming EP set for release in July. I first caught French Girls at Lawn Gnome Publishing back in February and I’ve been aching for an album ever since. “Crazy Yo!” kicks off the teaser and sets a punkrock pace. The second track “Aerobicise” show off more of the quirky, feisty lyrics the band is known for. Listen here and get excited for the rest of the EP to drop next month!

One of the bands signed to the newly formed Rubber Brother Records out of Phoenix, Petty Things offers listeners disembodied rock for the post-punk generation. Their first single “Chasing the Sun” nods to the early innocent years of rocknroll dragged through the grime of distortion to arrive ready for modernity in proper style. Make sure you stick around for the song “Feel”, a friendly anthem of disaffection that will have you dancing. Listen here. 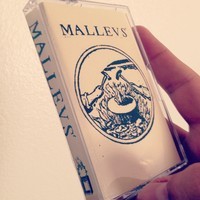 The first track from the Mallevs, side project from some of the members of Phoenix’s Sleep Money, is like a peaceful dream in an android-infested, industrial afterworld. Beautiful and distant. Calming and chilling. More like the cooling touch of sheets on an untouched bed rather than the warmth of a familiar blanket but comforting nontheless. The presence of ethereal, almost entirely indecipherable vocals provided by Jen Deveroux only amplifies the eerie ambiance. Listen here.

Tk and the Irresistibles

I came across Tk and the Irresistibles through their label Rubber Brother Records and I’m almost sorta glad I didn’t discover the first single from the band until now. “Candy” was released last October but it is the perfect summer song. It’s definitely easier to transition to the Hot Season with some fun-loving music you can “shake your butt” to. The electric ukulele adds to the nerd rock party feel. Listen here.

One of the tracks off DUNE Drift, a compilation of Tucson artists brought to you by the art space Topaz, “That’s Fine” by Womb Tomb is a bit feistier than you might hear on the rest of collection. That’s because Womb Tomb leans toward the shoegaze side of punk but not in a Sonic Youth way. Maybe it’s just their shout-it-out vocal stylings laid over the driving rhythms and softly merging guitars but these guys are definitely more apt to rile you up than lull you. Listen here.