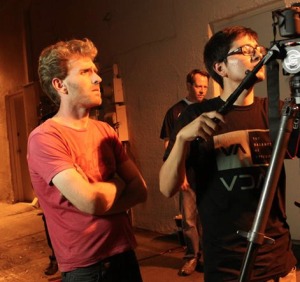 Climbing Everest. Swimming the English Channel. These are mere tasks compared to what Travis Mills of Running Wild Films is trying accomplish.

Mills, ASU film graduate, actor/writer/director, and in his spare time he’s trying to crack the Cold Fusion code, is attempting to shoot 52 short films in 52 weeks – a feat that has never been accomplished – let alone attempted. Mostly because it is just “this short” of insanity.

Early last year, Running Wild Films started a Kickstarter campaign to raise funds to help with the cost of shooting the 52 short films, based on short stories from writers such as Edgar Allan Poe, Mark Twain, and James Joyce – all adapted to take place in present day Arizona. After hitting their goal, they were, literally, running ever since.

Think globally, act locally, is something he is very passionate about and to that end has enlisted local artists, actors, producers as well as local rock bands like the Former Friends of Young Americans, Serene Dominic and The lovelost, to score his countless trailers, features and shorts.

I caught up with him right after he completed shooting the 23rd film in the series to get a glimpse into his mind, passions, and if he actually sleeps. 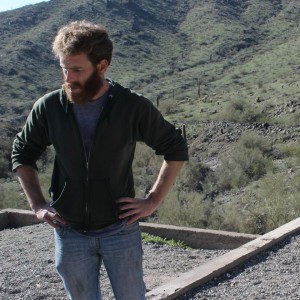 Me: When did you first get the idea of shooting 52 films in 52 weeks?

TM: I’ve always wanted to make films at that pace. I don’t see any reason why not to. Call me an extremist. I’ve also always had a passion for adapting literature to the screen, specifically public domain works. We have these rich stories at our disposal and the chance to re-imagine and re-invent them. The ideas came together and birthed the 52 project.

Me: It’s cool that you’re not only a local filmmaker but you are serious about using local resources.

TM: Again, we have all these underused gems at our disposal: local music, businesses, historical sites, etc. I hate to see local film that doesn’t take advantage of Arizona. It’s time to own our town, our state in our creative endeavors.

Me: Which one of the short films is your favorite adaption?

TM: I can’t pick an absolute favorite. I adapted all of James Joyce’s The Dubliners, a fifteen story collection. It was the hardest writing I’ve ever done. I’m proud of that.

Me: Is it true you don’t sleep?

TM: That’s the rumor. The truth: I sleep just as much as anyone else. Anyone can do what I’m doing. All they need is the drive.

Mills plans to screen all 52 shorts over a weekend showcase – but not before each of his backers through Kickstarter has received a digital download. I don’t believe him about not sleeping.

You can view the progress of the 52 films on the Running Wild’s YouTube channel here.