Tempe, in terms of music, is more than just a place; it’s a sound. There are artists based out of Tempe who do not have the “Tempe Rock” sound and, likewise, there are Tempe Rock bands who live beyond the city’s borders. Many of us have heard of the Mill Ave-Long Wongs-Tempe Rock trifecta that took over the Valley in the 90s. As the Gin Blossoms were “making it” and Tempe was being dubbed “the next Seattle”, the sound that would become Tempe’s trademark was being carved out by bands like Dead Hot Workshop, The Pisteleros, The Piersons, and The Refreshments.

From this sound emerged not just a musical style but also a community. It was the first time Arizona really rallied around the very musicians that grew up kicking rocks in this dusty desert. It became cool to check out local acts rather than dropping big dollars on pricey tickets for national shows breezing through town. For that same dollar amount, you could see an awesome band and afford drinks at the show. Before I could drive, I had already spent some time at Long Wongs, outside because Sara Cina always carded, listening to the music spilling through the door and seeping from the walls, smoking stolen cigarettes, trying to look in the windows to see the band but worried about being too obvious in our adoration because the window (of course) was right behind the stage so everyone inside could see our underaged faces pressing against the glass. 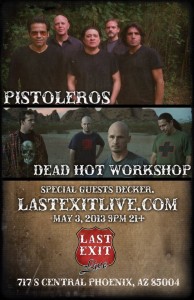 By the time I had a  press pass that would get me actually in the building (but only a little space by the stage to take pictures), the second wave of rockers were gaining prominence. Going to a Truckers on Speed show became a right of passage for friends reaching legal drinking age. They were our rock stars, as fervently admired and as equally distant for us kiddies still playing at being grownups.

More than a decade has past since this time and two things have withstood the test of time: the music and the community. Heading out to catch the Pistoleros and Dead Hot Workshop at Last Exit Live along with relative newcomer decker. on Friday night, I was excited not only for the music but also for the familiar faces amid the fans. Over the long history of a band, little thought is given to the relationships that form amongst their fan base  but after years of spending nights on the town together – oftentimes drinking and, very occasionally, dancing – you come to know the people around you. Members of other bands will turn out to support their fellow musicians, further blurring the lines of friend and fan.

The price of admission included a seven track album, sort of a souvenir featuring the night’s performing artists. What a great idea! I ran into Fran, Dead Hot’s beloved merch girl, who slipped me a bootleg copy (am I not supposed to say that?) of Brent Babb performing love songs. Amazing, and I mean both Fran and the album. Her husband is the Valley’s most important (and most anti-press but we still love you) musical archivist.

As heartbreaking as it was, we missed decker. due to an unavoidable dog mishap, but you, dear readers, should already know of our love for decker. And, for those of you who don’t love decker. as we love decker., I ask, “Really? Have you heard decker.?” Punctuation aside, they’re a truly amazing band.

Dead Hot Workshop (or the Dead Hotties, as Sarah Ventre used to say) took the stage followed by the Pistoleros. Marc Norman of Marc Norman fame (and Ghetto Cowgirl, etc.) joined Dead Hot onstage for a song. I brought along some friends who were hearing the bands for the first time and a couple that could reminiscence about the first time we heard that song way back when. All left equally impressed. These bands aren’t playing shows together every week. Many of the members have other musical projects underway so these moments when they return to their roots become much more special. It’s a night to gather and celebrate to a soundtrack we know and love.

We’ll keep watching for the next show. I know I want to be there.