Fans of Michelle Blades, like myself, should not enter into Zoroaster & Two Devils with any expectations. Turns out the sweet and pensive songbird of yesterday has flown into the fire and emerged fiercely throated and flame crowned. Listeners will hear no ukelele on Blades’ latest and that is only the beginning. Modge podging such disparate elements together as the innocence of bubblegum pop, the earthiness of indiefolk, and the spaced out elements of 60s scifi sound tracks, the album is a strange but worthy ride. I was super excited to hear some of the ass-kicking (vocally speaking) found in Michelle’s other musical enterprise, North Dakota, has bled over into her solo work. Zoroaster & Two Devils marks Michelle’s first album on her Parisian label Midnight Special Records and, although, she might have relocated across an ocean but she’ll always be counted among us desert folk. One of us! One of us! Take a moment to join in the chant, then listen to the album here. 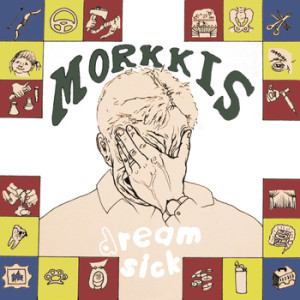 The genial shoegaze rock of Tucson band Dream Sick that greeted me on my listen to Morkkis immediately left me with a nasty case of late-comer’s remorse. How could I have lived for years with no knowledge of this band? What is wrong with me?! The only listener’s remorse greater than this comes from really bad music you secretly love, since we’re on the subject. Thankfully, Dream Sick fans are totally safe from this latter condition. The music contained on Morkkis is both intelligent and inviting, a combination less common it seems with every passing year. And, this is not to say the band is without its more dissonant moments, like those heard  “Gone”.  The word “morkkis” refers to a “psychological hangover” according to the group’s bandcamp page. An apt title given the album’s tendency toward pensive, deeply reflective lyrics that tug at the heartstrings with love and remorse. I suggest spending some time with Dream Sick’s latest here.