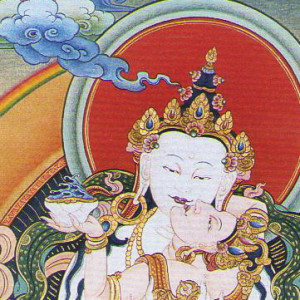 In the 3+ years of YabYum Music and Art’s existence, we’ve continually been asked, “So, what does YabYum mean anyway?” For a short time, we held to the mystery, only hinting at it’s Vajrayana origins. As of late however we decided what the heck, why not provide an answer. Both editors, however, had different answers. Here we go…

L:  When I started YabYum M&A back in 2009, I was completing my graduate studies in philosophy and religion. My interest in the development of American Buddhism and the writers of the Beat Generation (Kerouac, in particular) first led me to my course of study. I was interested in most cultural merging points wherein religions undergo transformations. I see a new emerging consciousness in the world that dispels traditional religions in lieu of new freely-formed spiritual paths. Art has always been my chosen spiritual practice. I chose the name YabYum for three reasons. It was one of the first things I looked up about Buddhism when I was 15 and reading Desolation Angels for the first time. Through it I discovered the writings of Alan Watts. Secondly, I thought YabYum had a musical sound when spoken. And, perhaps most importantly, it was a way for Jack Kerouac to get girls into bed. Whole story. Ta-da.

M: Quite literally, yab-yum means ‘Father and Mother.’ In Tibetan art, each male and female consort represents the unity of masculine and feminine ideas. Yab, the male, symbolizes compassion (karunā) and skillful means (upāya-kauśalya). The female, Yum, links to transcendental wisdom (prajñā) and consciousness. The joining of both principles is then expressed (more often than not) in sexual partnership.

“The two components are an invitation to reintegrate the duality of phenomenal experience into the plane of the Absolute or bodhicitta from which we have decayed,” says the internationally recognized renowned scholar of Tibetan Buddhism Lokesh Chandra. “Instead of repressing the inborn libido of creatures, it is well to transfer it to higher planes.”

Yab, possessing the māyā-body and skillful means and Yum, retaining transcendental consciousness, reintegrate together on the plane of ultimate reality. Entering into the consciousness of Being, mahāsuka, or the ‘great voidness,’ corresponds to intense pleasure.

Tson-kha-pa, the famous 14th to 15th century Buddhist scholar, says that the Yab is the enlightened attitude that specifically causes Buddhahood. On the other side, the Yum is the discriminative acumen, an imperturbable tranquility that must be examined again and again.

Says Lokesh Chandra, “Just as both the father and mother are necessary to produce a child, likewise both an enlightened attitude and discriminative acumen are necessary for the arising of Buddhahood.”