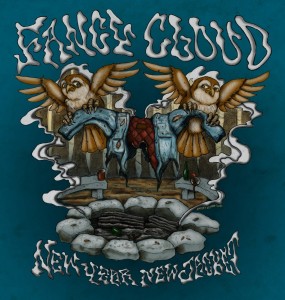 The sweet and sombre music of Matthew Reveles has always held a special place in the hearts of the YabYum staffers. We first covered him back in the early days of our publication and have followed his work ever since. We found ourselves waiting, along with other Reveles fans, for new recordings. The day has finally come to pass when all the patient fans can breathe a sigh of relief with the official emergence of Fancy Cloud.

Oh, and just so were clear, Matthew Reveles is no longer performing as “Matthew Reveles” or even “Matthew Reveles and Fancy Cloud.” As Matthew made clear in an email exchange, “…in an effort to change directions and progress musically, we decided to shed the old stuff and just start kicking ass as Fancy Cloud, which is what we will henceforth be, until the end of time.” Awesome.

The first track, “New Year, New Jacket” starts as though you’re sitting with the group ’round a campfire. A dusty banjo is tugged from its case and the daunting vocal begins: “He came, he saw, he couldn’t wait to leave. Sat in disbelief, fire flickering.” Filled with harmonious horns, upright bass, and sashaying drums, it’s a beautiful way for Fancy Cloud to make their introduction to the world.

The B-side of the record, “No Going Back,” is a song rooted in 1950’s doo-wop rocknroll. However, the underlying message, “When you’re born they tell you one thing you can trust, when we die all of our bones will turn to dust,” sounds more 21st century. The use of electric instrumentation stands in stark contrast to the previous song and provides a great counter-balance on the record.

So for 6 bucks you too can get Fancy Cloud’s new record New Year, New Jacket from President Gator –  the label founded by Jeremiah Gratza (Stateside Presents/Crescent Ballroom) that saw releases from Bogan Via, Gospel Claws, and the ROAR last year. It’s limited to 500 hand numbered copies, pressed on 180 gram virgin vinyl, plus you get a free download card! So pick up New Year, New Jacket from Fancy Cloud and look forward to their first full length coming soon.

Check out Fancy Cloud performing an acoustic version of “Philadelphia, PA” a song planned for their full length release.