The Zoo Incident
Lovely
The Zoo Incident’s much anticipated sophomore follow-up to their 2011 self-titled release is set to drop this Thursday, Feb. 14. With a name like Lovely, the album is perfectly suited to a Valentine’s Day release as it tells the story of bandmates in love Alex and Andrea. The first single from the album is available here for your early listening pleasure. The track “Experiment” is a warm, gently-saturating indiepop song that bodes well for the upcoming record. 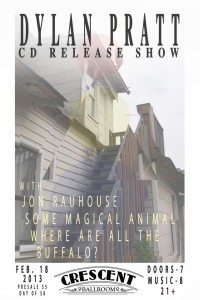 I don’t know what I’m more excited about: the new Dylan Pratt album or the Dylan Pratt album release show. It’s a tough call. On the one hand, Beg For Fire, Pratt’s second release, promises to be an exquisite album of masterfully crafted songs. On the other hand, Pratt’s release show brings together the staggering talents of Jon Rauhouse and our 2012 Songbird of the Year Kristina Moore of Where are all the Buffalo? on the same bill February 18th at the Crescent Ballroom. Thankfully, I don’t have to choose between one and the other. Come Feb. 18th, I’ll be able to enjoy the show and leave with the album certain to bring hours of further enjoyment. In the meantime, Dylan Pratt released a video for the first single from the upcoming album that fans can enjoy here.

Get tickets ahead of time here. 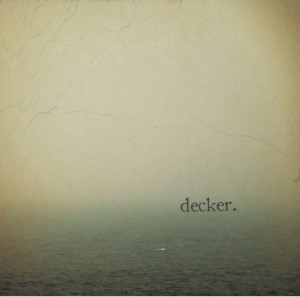 The scene is abuzz with anticipation for the latest decker. release. Fans will not be disappointed. Slider might be decker.’s best album to date. Considering Decker himself won our 2011 award for Songwriter of the Year, that’s really saying something. I wouldn’t be surprised to learn Brandon Decker traded his soul at the crossroads for the ability to craft compelling album after compelling album. Nor would I be surprised to learn he knew how to call in such a trade at the crossroads given the mystical aura his music carries across. I feel bad for everyone not in the press who has to wait for the official release on Feb. 26th to hear the entire album. Suckers. At least, you can enjoy some sneak peeks from the album compliments of the decker. gang here.

Lots of bands try to tackle looming social issues which can get a bit boring for the rampantly disaffected generation. Then there are bands like Dirty Lingo that take on the more day to day issues of psych meds and sexually-overcharged girlfriends all set to a beat certain to get any bar hopping. The boys of Dirty Lingo mix gritty pop and infectious, radio-friendly rock with surprisingly harmonious undertones. Check out the first two singles available from their upcoming third album here.

I Want to Find Happiness and Never Come Back

Foxchildren first earned our attention with their 2012 album Only One Soul Knew All My Secrets but it’s the promise of their upcoming sophomore album that has us really excited. “Freedom,” an early single from the impending release I Want to Find Happiness and Never Come Back, bears the mark of a band that just crossed the line between good and really fucking good. The music maintains the tones of sincerity and alienation that defined Foxchildren’s first album while the overall sound has been fleshed out and developed. Check out the single “Freedom” and don’t forget to listen to Foxchildren’s 2012 album as well here. Then, you can join in the wait for I Want to Find Happiness and Never Come Back with us.