I’ve heard a lot of people talking about how 2013 is going to be their year. In fact, I’m one of them. I’m a big proponent of the Katt Williams’ “Keep it Pushing” approach to life. River Jones is also of this ilk.

When I returned to Arizona and started to catch up on the music being made in the Valley, I quickly became enamored with the musical offerings being put forth from River Jones’ artists. Courtney Marie Andrews, Michelle Blades, Owl & Penny, You Me and Apollo, and others. It was a special time for the label and the burgeoning of a new era for the local arts community.

Since that time, I’ve watched many of the artists I came to love change course (or zip codes) and leave the collective of River Jones Music. The artists who occupied space on Jones’ label in the past have benefited from his guidance. He’s encouraged and developed some of the most promising young talents in Arizona. They learned the ropes of the indie music business while maturing as artists. Then, they flew the nest.

I’ll admit it. I had my brief moment of doubt. Ever so brief. Then I started to hear the new names he was signing. Steff Koeppen and the Articles, Sareena Dominguez… These lovely young women had tremendous potential, but they were in the earliest stages of their music careers. He could fine tune them, get them noticed, but what then? A couple releases later from April Bird and Lauren Farrah, my new girl crush, had things on an upswing and my concerns dispelled. 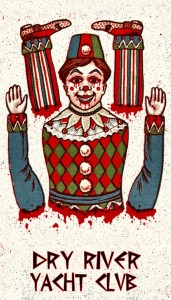 Then 2013 rolled into town and River Jones gave us all an indication of the big plans he has underway. On New Years Day, River signed five new bands from different locales, simultaneously expanding his collective and developing a network of artists across the West. F yeah. And, wait…. one of those newly signed groups is Dry River Yacht Club?!

This was something I was totally not expecting. The awesomely talented, locally adored DRYC has developed an almost cult-like following of steadfast hippies among the other fans drawn to their fiery, gypsy folk rock. I’ve never asked, but I would bet lead singer Garnet is full-blooded Roma or some gypsy queen reincarnate. They’ve been on the scene for years and I began to worry they would continue to bump their heads against the difficulties of industry and location like so many worthy groups before them.

RJM and DRYC might just be the mystical pairing of forces needed to gain escape momentum. And, by escape, I do not mean an escape from Arizona itself (for all you haters) but an escape from the real and perceived limitations of our location. This single signing would make the upcoming year a little more exciting but on that same day he picked up four other innovative music-makers: Portland’s Bike Thief and Alameda, Austin’s Technicolor Hearts, and Seattle’s Sophie Duccini.

If I was going to bet on the powerhouse capable of busting through the glass ceiling holding down Arizona artists my money would be on River Jones Music this year. The possibilities are endless.