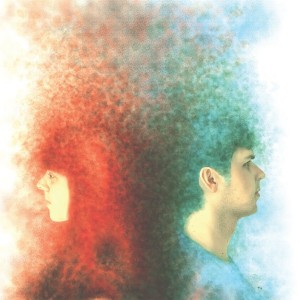 The musical pairing of Madeleine Miller and Bret Bender might have been a match made on, well, Facebook, but the results prove it must have been preordained by the cosmos. Just listen to their EP Wait Up if you doubt us. This is actually the group’s second EP. Their first EP was a home-recording made shortly after Madeleine and Bret combined forces. They gained attention early and were quickly signed to Common Wall Media, home to two of Paste Magazine’s “10 Arizona Bands You Should Listen to Now“. Bogan Via then recorded the aforementioned Wait Up with Bob Hoag at Flying Blanket. Then, to wrap up a busy first year on the scene, the band released a remix album which included a new track “Gatsby”. Bogan Via was ready for live performances so early in their life as a band that the early fans (YabYum staff included) could watch the duo develop their own sound and push it forward. Some bands take years to move through such progressions. For our Dynamic Duo, a busy year is all Bogan Via needed to go from really good to stellar.
Check out our previous award winner:
Best New Band:
Diners