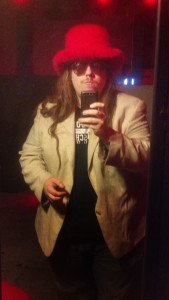 What can one say about Jack Maverik? That he’s the most understated cool guy in the scene? That he has been a fiercely positive push for many of the Valley’s young musicians? That what he lacks as a sound guy is more than made up for by his staggering good looks and razor sharp wit? That he has the power of resurrection? Yes, yes, yes, and yes!

That is why, this year we are honoring Jack Maverik with our Personal Jesus Award. He spent his forty days in the desert trying to keep Last Exit alive only to find (and give) new life at Long Wong’s Tempe, Version 2.0. In his tenure at Wong’s, we saw the first miracles as the crowd slowly grew as did the bands clamoring for gigs. And, recently, Jack secured his status as a miracle maker by actually dying and coming back to life. So today, we ask that you take a moment to remember Jesus Jack and all his works.

My name is Jack Maverik and I am a social engineer. I used to be an audio engineer and still do that from time to time. But mostly I use dog training techniques on humans and see what sticks. My Petri dish of choice over the last couple years has been the scrappy little Long Wong’s Tempe.

Too much ego and not enough sense.

People that I don’t understand. I love being reminded that I’m an idiot and there is a lot about this world that I will never ever ever understand.

Everything. I love the weather. I love the people. I love the politics (they suck, but god are they fun and interesting. Everyone needs an enemy.) I love that we have a large city but it’s still the frontier in many real ways. The bar isn’t just set low here, it doesn’t exist. This allows you the freedom to do whatever you want. Especially when it comes to music. There are no rules, where in some cities/scenes, there is an established order to things. You have a very real freedom here, and the biggest enemy is apathy and fear.

All over town. My job as a social engineer is to create community. And yes, I know that sounds stupid given my reputation of being a ruthless asshole, but I promise my press is exaggerated. The most obvious place to see me is at Long Wong’s Tempe but you can also see my work anywhere bands like Japhy’s Descent, Future Loves Past, Banana Gun, Darkness Dear Boy, Sasquanaut, TKLB, Palms, Avery, Playboy Manbaby, etc. play. I’m proud of the community that we’ve been able to foster and create at Long Wong’s and its fun to watch it grow and expand outside our tiny walls and infect the town. It’s a blast. 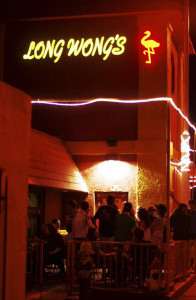 I died in October. I was oddly at peace with my accomplishments. We have a music community that says to our best bands “Hey guys, you’re awesome, you should stay home.” We’ve had this disease in our music scene that teaches bands that they’re better served by not playing. Once a band reaches a certain point, they’re encouraged to stay home and not play shows. They suddenly become “too good” to play Monday at 1am or Tuesday at 8pm. They’re told they’re too good for those slots and they’ve already paid those dues.
In real music cities, you’re offered more opportunities, not less. If you are killing it at one club on a Wednesday, then another would offer you a gig on Tuesday. Here in Phoenix, for the last 10 years, promoters, club owners, talent buyers, booking people, etc. don’t want you to play out that much. They want you to starve. They want you to put all your effort into their show. They want you to beg everyone you ever met to give those people $5 or more to come see you. I don’t know any artist who only performs their art one day a month who’s any good.

I would love to see the idea of “over-saturation” or “diluting your draw” to die a horrible painful death. Because our best bands stay home and try to just play “big shows” at “cool clubs” once a month, that means, that on any given night, odds are, our best bands are not on our stages. How is this good for our music and arts scene?

I don’t care if a band plays 5 times a week (well I do care, that’s awesome), I’m still gonna book them at Long Wong’s. It’s my clubs responsibility to be the best choice to come see your band that week, not the bands responsibility to stay home. The venue should offer the bands just as much as the bands are offering the venues. That’s just fair. And that’s not always the case.

7. What is your weapon of choice for the zombie apocalypse?

My 1972 School Bus and a map to Wyoming. My guess is that all the zombies will head to the Coasts first, as they are the most populous. Then double back, but by then, they’ll be decaying and famished. They’ll be easy pickings. Wal Mart sells M4A3’s now. Full up NATO rifles. I figure hit a Walmart, load up and defend a small town in Wyoming, you’ll be set for years.

Check out our previous award winner:
Favorite Songbird:
Kristina Moore of Where Are All the Buffalo?