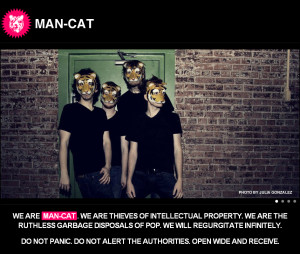 MAN-CAT oh MAN-CAT, where do we begin? From their lively sound crafted of sampled pop music thrown into a blender, the band then performs these permutations live in a must-see performance piece. MAN-CAT has truly gone above and beyond this year, not just in the realm of sound but also by way of  self-promoting, revolutionary media antics that have garnished the band much attention while yielding fans considerable enjoyment. They started the year by physically releasing a copy of their EP Hunt Catch & Kill, followed shortly after with the incredible music video “Yeast.” They were featured in a Peruvian magazine, and then, the barf happened. Justin Bieber’s barf to be precise. For which MAN-CAT took the blame. It even caught the attention of MTV Greece. But that’s not where the fun ends my friends, oh no. Just recently they announced their newest project, “Pussy Cola,” with Lana Del Rey. A video you have to see to believe:

No music is safe with MAN-CAT, and that sounds like a good thing to me.

Check out our previous award winner:

Best Album for the End of the World:
I Drew a Picture by Stephen Steinbrink