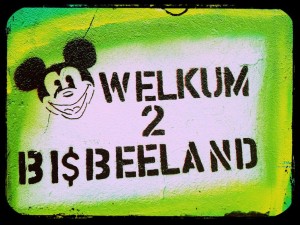 If we here at YabYum ever throw a music festival, we’re going to ask Anamieke Quinn to host it for us. After spending the weekend at her supremely organized, yet ever so laid back festival in quirky, adorable Bisbee, I can honestly say this was my favorite event in all my time with the publication and I’ve seen some amazing things in my three plus years here.

Maybe it was the setting… I’d never been to Bisbee before despite my wide-ranging Arizona adventures. It’s long been on my bucket list. The town did not disappoint. The eclectic community sits socketed into the rises and falls of the mountainous terrain. When mining gave way, Bisbee found new life as an artist colony. Anamieke has a special love for Bisbee so she already knew some of the best spots in town and made arrangments to incorporate different venues throughout the downtown into the Sidepony Express Music Festival. Just heading through the festival’s schedule meant a fairly decent tour of historic Bisbee.

A lot had to do with the bands… If I had to put together a list of bands I love to see and bands I’ve been meaning to see it would have looked a lot like the lineup for Sidepony. And, as an added stroke of genius, most bands were scheduled to perform more than once so you didn’t need to agonize about whether to go to the 3 pm Ruca show or Doctor Bones. Both had different sets slated at different times. This was an especially nice consideration for the performers as the festival was all about camaraderie. If your band was slated to be on at the same time as another act you’ve been meaning to check out. No problem. Catch the other time slot. Anamieke thought of everything.

Perhaps the most remarkable thing for me personally was the fluidity of the event. Everyone was friendly and timely. Over three days in six venues with dozens of bands playing and more than 75 performances scheduled, everything was relatively on time. No one tumbled into the adjoining time slot. If I showed up to see a band play at five, they would be there. This might not seem like a big deal but, as a writer who covers a lot of music events, it is. What is it about a person that as soon as they acquire a guitar, they can’t manage a wristwatch? I just don’t understand.

Throughout much of the event, Anamieke was a cheerful blur on the streets rushing between performances. Maybe because she’s friends with most folks on the bill everyone became friends by association for the weekend. A vaguely familiar face on the street meant that person was likely in town from Tempe/Phoenix for the festival. It was safe to ask, “What band are you with?” if you didn’t recognize someone right off the bat. Instruments criss-crossed town and people nodded at each other in passing. It just so happened that a Steampunk ball was scheduled for the Saturday of the festival so music fans mingled with cos-players in the streets of Bisbee. A light rain kept things festively chilly (for everyone but Anton who didn’t bring a jacket).

Bisbee is full of little inns and hotels. I was fortunate to secure a room at the Copper Queen for the weekend. I have a special place in my heart for haunted hotels but sadly report I have yet to encounter any strange occurances. Maybe next time. I’m definitely going back next year! 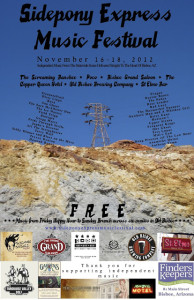 The trip highlight for me just might have been this little drinking contest between Baretta Lynn of the Pübes and Ricky of Prague. Simultaneously amusing and emasculating and, apparently, not the first time this event has taken place. The Pübes won.