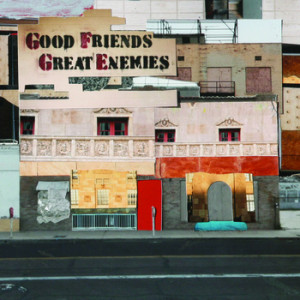 Good Friends Great Enemies came on my radar a couple months back. Since that time, I’ve had the album in rotation every single day. Every single one. I kept pushing back the article so the obsessive listening remained a professional practice. Finally, I had to give in.
There is a dialogue an accomplished listener will enter into on first review of Good Friends Great Enemies’ self-titled release. The album opens with the trippy/proggy “Fool’s Ghost” immediately setting the tone for the entire album.  Now, I know some of you hipper cats just tensed up upon reading that last line, as I did when listening to the album for the first time. Relax. It’s really good. I mean really fucking good. The quality of the album will carry you right through initial thoughts like “has this been done before?” By the time you’ve moved through “Helen (Golden Child)” you’ll be hooked.
The band makes a bold and, ultimately, wise move on the third track by directly addressing the question, “Has this been done before?” By including their rendition of jazz standard “Autumn Leaves” Good Friends Great Enemies shows that they are doing something that has been done but they’re doing it better and in their own way.
We all need to get over the anxiety of influence and get some serious rocknroll made. Good Friends Great Enemies might just be the band to lead this charge. These days, and I say this as both a woman and feminist, music needs more balls. A lot of the important music being made today has moved away from the hard, driving music of earlier rock toward a disembodied folkpop. That’s great and all, but we as a society are nowhere near done with rocknroll. Music sometimes needs that kick you in the face, rock out energy behind it.
The musicianship stands out most on the album so I had to check the band out live to see if it would hold up in person. I expected grizzled players who earned their chops hashing it out with different groups over the years yet still managed to maintain a relevant perspective on music. The members of Good Friends Great Enemies are offensively fresh-faced for their skill level.  Evan Bisbee, Max Greenwald, and Bryce “Peasoup” Broome should only be that good at that age if they spent all of high school locked in a garage practicing and reading Nietzsche. That’s it.
My favorite track on the album (at the moment) just might be the song “Darkness” but a lot of that has to do with the way its predecessor “Staying at Home” builds and feeds into it.  The best way to hear this song is live but one must first know all the words in order to join in the heartfelt shout-along the crowd will probably insist on.  So, check out the album and then go see Good Friends Great Enemies live. It’ll be good for your soul.
Links for Good Friends Great Enemies:
Bandcamp
Facebook