I’m Dana Armstrong and one of my projects is Valley Fever Country Music Night. It’s a weekly event. I book local and touring country bands, make posters, and play old country records along with fellow deejay Johnny Volume. Our motto is “the beer’s cold and the music’s old” or “yesterday’s records, today’s bands, and tonight’s good time.” Arizona has strong roots in country music and a great country music scene today, we think people should know about it.

2. Where can people see you work?

Valley Fever is every Sunday night at Yucca Tap Room at 9pm, and occasionally at different locations around town. Friday January 4th, we will be at Crescent Ballroom.

3. How did you get your start?

I’ve had dj nights since about 1997, starting with Fort Barracuda classic rock night at a bar called Cannery Row. I started collecting records from thrift stores and record stores when I was about 12 or 13. I’ve collected all kinds of records mostly from the 1972 to 1982 era. I started Valley Fever in 2005 or 2006 as a classic/outlaw country dj night, then began adding bands about a year into it. I was lucky enough to get Johnny Volume to join about three years ago. I wouldn’t do it without him now. 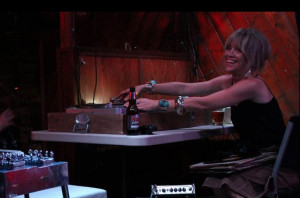 Old country music in an old bar. But right now? Johnny Paycheck’s “Old Violin”, Mickey Gilley’s “A Room Full Of Roses”, Peso Dollar, the wood walls on the old side of Yucca, good friends and people having a good time, old records for the imagery almost as much as the music, and 1970’s Phoenix culture — initially, my vision for Valley Fever was to recreate Mr. Lucky’s from 1977.

I stay motivated by good country bands that are playing today–the ones who have an understanding of the past, a clear vision of who they are as a whole, the drive to encourage people to come out and the ability to engage them when they do. When a performer is inspired from the inside out instead of the outside in, it makes all the difference. I have fun making posters and album art for those bands and doing what I can to get the Arizona “real” country music scene out there.

It really is the most beautiful state – the Arizona desert is my favorite place to be. It seems like there are endless amounts of uniquely magnificent places to explore (Colorado River, Havasupai, Mogollon Rim, The Superstitions, etc), and that’s led to a grounded perspective and an independent-mindedness that’s part of Arizona’s culture. It’s gone politically haywire lately, I blame a lot of that on the population boom of the late 90s. My family’s been here since the early 1900s, I treasure their photographs and mementos of the state from that time period. For me it is definitely home.

Very hard to answer without a cliché, but I want to have fun and enjoy life as much as possible, and do what I can to help others do the same.

7. What is your weapon of choice for the inevitable zombie apocalypse?

I’m going to assume that zombies can’t swim…because they lack coordination and would also fall apart in water. So I guess I wouldn’t necessarily need a weapon, just a yacht or cruise ship like the Love Boat. Simple. 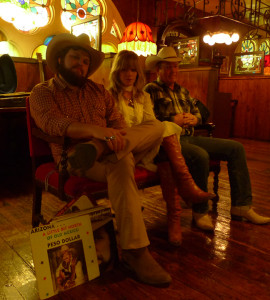