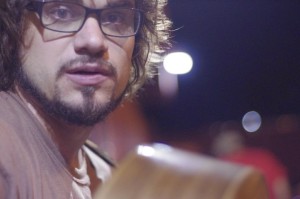 My name is Cary Miller, and I’m a bit of a Swiss Army Knife…I’m the lead singer / songwriter for the rock band Terrible People (based in PHX), and I also produce, engineer, mix, and master records professionally (Tobie Milford’s Alyosha being an EP the readers of this magazine might be familiar with for example), outside of being a studio rat, and artist, I also founded and co-own Surface To Air Records.

I became a lifer pretty much straightaway. I was 16, living in New Providence NJ (where I grew up), and teaching myself how to play guitar on an old Takamine Acoustic I had bought at a flee market for $100.  After many attempts at songwriting power pop/rock kind of tunes, I wound up with a song a called ‘A Long Walk Home’ which eventually became the first recorded demo for my old band Fashion Victims a scant few years later.  Because of a hell of lot of Napster downloads of this old demo, playing a ton of illegal punk rock shows all over the tri-state…and a lot of networking in NYC, PA, and NJ, this led to a life of total misadventure. We were always doing something that managed to plague my existence, either trying to get signed to a major label…touring, or generally ruining my life.  But as much as it was always a struggle, I never stopped writing songs or working in recording studios as a result.  FV even got to be on a Pixies Tribute with OKGo and They Might Be Giants before we called it quits for good in 2006.  A little over a year later I found myself on the other side of the glass working with Shelly Yakus (Mixing Engineer for Phil Spector on John Lennon’s Imagine) as an audio engineer, and last year Terrible People did a music video for our first single, ‘Bill Murray’ with my friend, director Lionel C. Martin (Boys II Men, TLC, Jay-Z, LL Cool J) so honestly I have no complaints.  I consider myself to be insanely lucky to get to do what I do and call it a career. 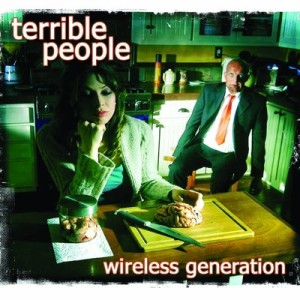 (I am so sorry, but I wound up writing a novel for this one)

I’m a firm believer that your life will imitate your art if you pursue it professionally. And that if you’re not careful your art will start imitating whatever “life” you lead as a result. The new Terrible People LP Wireless Generation was recorded in our friend (Surface To Air co-owner) Jason Jagoda’s house while it was undergoing foreclosure after his divorce.  This was the same home a close friend of his had passed away in a few years prior from cancer…so I think…being around his life and his struggles really influenced both the topical and personal nature of the album for the better.  Usually there are journalistic aspects from my day to day in a biographical context when I’m writing lyrics for songs, but…I don’t really have a formula for writing them; they’re all different. Melodically, I tend to “hear” basic structures and vocal melodies in my head before I play them. I space out and usually something “clicks” into place that gets me humming (schizophrenics get medication for this I believe, artists are totally screwed!). Lyrically, I’m always trying to keep things fresh. Sometimes I reference books, poems, movies or even other songs I love if it has something to do with what’s going on in my life at the moment. I also scan the news for headlines that stick out to me…and I collect quotes…If someone I know says something that really resonates with me or I read or hear something that really stands out, I always jot it down (so don’t be too loose lipped around me if you’re shy!). I keep a word document that’s literally been around since 1998 called “The Graveyard”. It’s filled with thousands of bits and pieces of things, all time dated, sometimes with notes about what I was doing at the time (yes I am aware that I am insanely OCD). You’d be surprised how often a little blurb or stanza rises from the dead to exact revenge on the world by finishing something I’m working on piecemeal. Also I think of songwriting as a craft that needs to constantly be honed. Sometimes I’ll go through a few months where I’m struggling to finish anything that I really feel is worth its salt. But I make myself sit down and write for an hour or so every day anyway. The repetition keeps me sharp, and thinking about lyrics, lyrical themes, and the emotional intelligence within the simplicity becomes the game. Lastly, as much fun as it is to write songs with a dry sense of humor, (IE: ‘Bill Murray’ and ‘All My Friends Are Vampires’), I’m always trying to sneak little messages or social commentary into my storytelling too. But when it’s all said and done…I have to admit that the most organically creative years I’ve had, usually revolved around terrible heartbreak in one way or another as the inspiration. I know that sounds cliché, but it’s true. There have been times in my life where the songs wrote themselves essentially as an emotional response to something difficult and usually those tunes are the ones I’m most proud of in one way or another.

I’m totally paraphrasing here, but Jim Adkins (From Jimmy Eat World) once told me in private that he thought there was some kind of a “scorched earth” aspect to the music industry these days. That the strong will somehow survive. I think Arizona has a lot of people who are tougher than you’d think from looking at a glance, and I respect that immensely. I also love a nice fall day where it’s below 70 degrees but it looks like summer outside. Oh, and there are some great restaurants if you know what to look for.

5. Where can people see you work?

Terriblepeople.com, Youtube, Spotify, iTunes, Facebook….finding Terrible People is easy, all you need is Google to be honest. And other artists or companies I’ve worked for in a technical manner can usually be found the same way. We’re even in Bill Murray’s Wikipedia!

I would love to do a world tour of some kind, full band with Terrible People, even if it’s only smaller venues, but using primarily Green transportation methods on the ground. I have this fantasy of just playing in every country at least once. Also I have a script for a film I’ve been tinkering on for a year…it’d be nice to see that get made.

7. What is your weapon of choice for the inevitable zombie apocalypse?
A lie detector and truth serum, so I can always make sure that the humans I team up with are on the level. It’s the backstabbing that gets survivors killed during a zombie apocalypse.