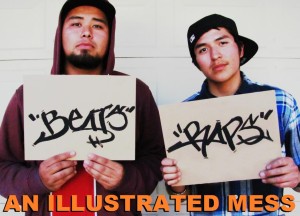 Lately, it seems as though my level of cynicism grows daily. I am often quick to outwardly reflect the animosity I feel toward particular mediums. However, the root of my condition is merely an attempt to purge life-force-draining energy rather than breed additional dark matter and chaos.

Not necessarily elitism, but instead simply not settling for work that I feel lacks passion and natural charisma. Many instances in which I attempt to be inspired by others’ work, I feel as though I come out of the situation with a cup of salty tap water and the type of stimuli that an old hag’s warts arouse sexually. Therefore, I feel obligated to purge and unabashedly express my distaste.

This is not one of those instances.

Upon rare occasion, a fleeting suggestion of random recommendation magically crosses my path, and the icky storms of mediocrity and loathing abruptly subside. Released in June, An ILLustrated Mess describes A Lack of Creativityas neither a mixtape nor a demo, but rather a, “Little pre-demo demo tape.” Whoa. A pre-demo? While I fully understand the concept, with a total of seven quality tracks, I would categorize A Lack of Creativity as a solid first ep. Yet, the distinction lacks importance, and despite modesty A Lack of Creativity inspires applause and a heightened degree of powerful appreciation. 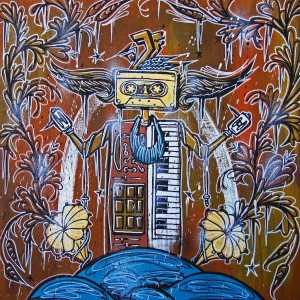 Based out of Flagstaff, An ILLustrated Mess delivers a slick and classy composition of intellectual lyricism and hip-hop beats set upon a backdrop of melodic jazz loops.  Reminiscent of Deep Puddle Dynamics or a forest dwelling Tribe Called Quest, A Lack of Creativity resonates with sentimental yet brutal optimism and vibrant energy.

Meanwhile, even in moments of bolstering a lyrically inflated ego, An ILLustrated Mess continues to be unpretentious and impervious to harsh criticism.

An ILLustrated Mess offers A Lack of Creativity as a free download. Although the YabYum Awards are not until December, these guys get my vote for the most undervalued non-album release of the year. I anxiously await to hear what a formal release from An ILLustrated Mess will sound like.