I’m Mitchell L. Hillman, Music Editor for JAVA Magazine, as well as a writer for Echocloud.tv, and editor for my blogs soundsaroundtown.net and mindpopmusic.com. I write about music constantly, so I need to have that many outlets for it and I’m always looking for more, in fact for everything I publish or post there are probably five more things sitting on my laptop waiting their turn or collecting dust for a year. That’s mainly because I spend so much time writing that I don’t have time to post all of it and still keep a day job. I’m also a painter, artist, poet, journalist and novelist. I don’t really consider myself to be a music journalist or music critic, I call myself a music writer – I do not write with any objectivity, I love music too much for that and I only write about what I truly dig, I found out early on you can spend way too much energy ripping on stuff you don’t like, but what’s the use in that? You’re just spending your energy, time and resources on something that is personally not worth your while.

I was pretty sickly as a child, which led to me missing a lot of school and I found that with all the hours to fill, usually confined to my  bed or my room, I turned  to books, music, drawing and writing very early on. I think the first time I wrote a “novel” I was nine and by that time I had been drawing daily comic strips for a couple years, so a lot of my childhood was spent inside my mind. When I wasn’t ill I was outside, which led to more drawing and writing, walking miles from home to read a book by a river. Much later toward the end of high school,  I discovered a knack for writing  poetry, enough to get it published and win some awards and I was also writing for the Audubon Society. It wasn’t until my second year of college that I figured out I was a writer though (I started out as a Bio-Chem major), I wrote a letter to the student newspaper and they invited me to start writing a column and  before I knew it I was one of the editors, at the same time I was one of the directors for the radio station. That is when music and writing merged into one passion for me. I’ve written for a lot of small magazines all over the country, I got my start in Phoenix writing for a cool little mag called SWITCH. After that disappeared, I was invited to start writing for JAVA (which was, oddly, the first local magazine I ever picked up when I moved to Phoenix)–that was five and half years ago, this month marks my two year anniversary as the Music Editor.

Obviously music is the biggest inspiration, specifically the amazing music scene that is currently busting at the seams in Arizona – but, really, and it’s probably trite to say so, everything inspires me: music, connecting  with people, great conversations, staring at the sky, the ocean, the desert, thunderstorms, meteor showers, my beautiful children, birds (I love creatures that soar to great heights and make music doing it), animals of all sorts, great movies, great literature, stars, long roadtrips to nowhere, love, grief, loss, depression, anxiety, mania, madness, walking, skating, surfing, hiking, drinking,sex…the whole crazy package of this wet mess we call life really constantly turns me on. Sometimes it is ridiculous things like random interactions with complete strangers standing in line, rare textures found in the fabric of living, both literally and figuratively – I’ve been  prone to write poetry about how much I fucking love blue jeans and old sweaters. Really, it all comes down to friction, the clues of friction, how we rub up against  the universe all the time, every day and how it rubs us back – it’s this trail of what rubs your reality the right way, what makes your day, what makes you dance or romance to soft moonlight and red wine, fine music on fiery nights of lustful rites. It’s this passage to knowing your senses and knowing the you beneath them, friction is found in everything and defines us as much as we define it. It’s how it feels to feel, to think about feeling too on Blue days, bright days, how it feels to feel and be real and in the moment. Friction…I guess that’s my term for what inspires me. 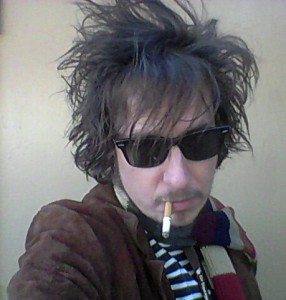 Everything, with the exception of the politics. I moved here 14 years ago this month and barring the exceptions of San Diego, Hawaii and Brazil, I really wouldn’t want to live anywhere else – plus, nowhere else on this planet has the music scene we have right now and  that has definitely been one of the things keeping me here for the last four years. I was about to move to the coast around 2007, but then this music community began to explode and I fell in love with it immediately. I love the weather here, even the summers. I grew up where it was either rainy and cold or hot and humid all the time – I hate the cold and damp and I’d prefer to never drive in snow or ice ever again, I can deal  with three months of extraordinary heat for nine months of paradise. Arizona is also really, really weird – there is no other way to say it, whether it is the stark and profound beauty found in the natural areas of this state, or the bizarre mish mash of architectural styles, cuisine and culture akin to Central America exploding in a mid-American suburban mall, or the people themselves, mostly transient who have moved out here for any number of reasons, each with their own story of opportunity and adventure, combined with the native population. It’s this weird chemistry that makes this state one of the most fascinating places I have ever seen and had the privilege of living in. I find it constantly inspiring whether I am in the city,  the suburbs or the wilds.

5. What would you like to accomplish before you die?

Well, last week YabYum called me “remarkably prolific”, so I can check that off my list, because that was seriously one of the highest compliments I could hope for concerning my local music writing efforts. Seeing as I think about death nearly every day, this thought weighs on my constantly. I think there is an intrinsic need in the human experience that we want to leave our mark on the world, we want to know, regardless of what “afterlife” beliefs we subscribe to, we all want to know that we made a difference for good or ill, we all want to be remembered, we all want to leave this world with a metaphorical impact crater that marks our existence in some capacity. I am no different in that regard, I guess. I would like leave my mark on this planet in a literary sense and before I leave this  pale blue dot, I would like to see some or  all of my books published. I am currently sitting on seven novels I’ve finished, working on three more that I am currently writing and I have five volumes of poetry ready to roll. The problem is that I am a writer and once I finish something I save it to my hard drive and it’s done, it’s out of my system. It’s only been recently that people have asked what else I write and right now, one of my first novels is being proof-read and edited, so they may see the light of day yet. I also have a collection of essays on rock’n’roll of which only a few have been published (it’s difficult to find someone who wants to publish a 22 page piece about The Who’s latter day albums or 15 pages about the last Rolling Stones album) and I would definitely like to see that in print. Finally, bringing it all back home, I have started work on a book about the Arizona music scene for the last five years, which I plan to be a collaborative effort with local artists and photographers. I want my children to be able to hand a book to one of their friends and say, “Check out this crazy shit my dad wrote.” I want them to be proud of that. I also wouldn’t mind having  the time to paint all the paintings I dream about and have sketched out over the years, writing is my art that I work hard on, painting is my creative release that has no rules or boundaries. I also wouldn’t mind doing a comic strip or working on comic books again.

6. What is your weapon of choice for the inevitable Zombie Apocalypse?

I thought about this question probably longer and harder than any of the others and at first I imagined a double headed halberd of sorts, that you could just spin like a pinwheel and decapitate the hell out of them like a bladed whirlwind through the crowd.  I discussed this with a friend and he mentioned that kind of weapon would be extremely heavy and the fatigue factor could be a serious issue. He then mentioned having a tank. This is brilliant, because even if you run out of ammo, you can still run over mobs and mobs of zombies. Then, when you run out of gas you are still inside a tank, safe with tons of armor between you and the zombies. It may not be as romantic a thought as slashing them to shreds  with a weapon in your hand, but this is about survival and I am totally digging  the tank concept in that regard.