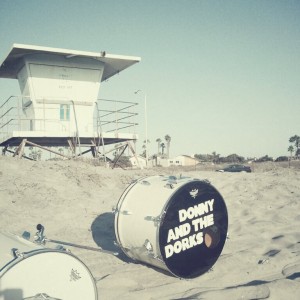 The first time I listened to Donny & the Dorks it was 10:02 on a Thursday. I was tired as all get out, a little elevated too. That’s when “Boner Skit,” the first track off their new self-titled EP, hit me like a (insert noun) to the face. “Falling Off The Deep End” barreled in second and it’s eerie synth and dance-mode style promply enticed me to look further into these Dorks.

In the process of trying to discover just who in the heck these people were, I found myself completley lost in the hypnotizing melody of “Navy Blues,” the album’s third track. I stopped what I was doing, paused the album, and proceeded to watch the music video for the song instead. You should do the same, I found it to be entierly relaxing.

“A person who is dedicated to living authentically, rather that from the ego… dorks are typically more noted for their quirky personality and behavior rather than their interests or IQ which may or may not be on level with traditional geeks or nerds.” Or so says the Urban Dictionary. Either way, the quirkiness shines through on the fourth song, “Peanut Butter Skit,” a funky instrumental complete with reverb soaked snare drum.

“Kick Him Off His Crutch” rounds out the album with it’s simple yet captivating sound. “Jazz, surf, whatever sounds the fanciest” is what they use to describe themselves and nowhere do I find that analogy more apt than in the final track. Then, as soon as it begins, the EP drifts away.

With a pair of shows scheduled on October 26 and 27 at the Yucca Tap and Trunk Space respectively, now is your chance to see these dweebs, I mean Dorks, for yourself.