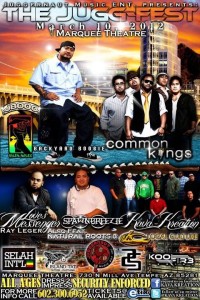 Billy Keys, who YabYum covered back 2010 with his group Roots Express, is in a new band as well – Kava Kreation. They have signed to a new label founded by Reagan Maui’a, who played with the Phoenix Cardinals, called Juggernaut Music Ent. Inc. and on Saturday March 10th, will as part of the JUGG-FEST at the Marquee Theatre. “SPAWNBREEZIE, NATURAL ROOTS, Love’s Messenger RAY LEGER, COMMON KINGS, LOCAL CULTURE, Arizona’s own KAVA-KREATION and last but not the least, internationally known and locally respected, the 1 and onlyJ-BOOG,” will be providing the entertainment. You provide yourself to this all ages show.